Beginning with Sadashiva, through Adi Shankaracharya in between and upto my own preceptor
I bow with reverence to the entire tradition of preceptors.

A Guru is not a person; it is a dynamic presence, expressing through one’s own preceptor. Just as light is necessary to show us the way, knowledge is essential to come out of the darkness of ignorance. Guru is the very embodiment of knowledge in whose presence the disciple discovers that light which surpasses all lights.

Bhagavadpada Acharya Sankara was not only a great thinker and the noblest of Advaitic philosophers, but also an inspired champion of Hinduism and one of the most vigorous missionaries in India.

In his work of propagating the great philosophical truths of the Upanishads, Acharya Sankara employed a number of weapons in his armory. He alone was capable of undertaking this task as the guardian angel of rishi culture.

An exquisite thinker, a brilliant intellect, a personality scintillating with the vision of Truth, a heart throbbing with industrious faith and ardent desire to serve the nation, sweetly emotional and relentlessly logical, in Sankara the Upanishads discovered the fittest spiritual general.

Swami Tapovan Maharaj of Uttarkasi was the master from whom Pujya Gurudev Swami Chinmayananda acquired his wealth of knowledge on Vedanta.

He taught Pujya Gurudev virtues enumerated in the Seventeenth Chapter of the Bhagavad Gita constituting the three forms of tapas – physical, verbal, and mental. He was a virakta mahatma, an embodiment of sanyasa, with supreme renunciation, wisdom, divine dignity and compassion.

Swamiji, a poet, was inspired by the Nature’s beauty, particularly the unfrequented peaks and valleys of the Himalayas. He reported his travels in two splendid volumes, “Wandering in the Himalayas” and “Kailasa Yatra”. Swamiji’s masterpiece is the bulky sanskrit volume called “Iswara Darshan”, an autobiographical sketch. He lived for 68 years as a monumental expression of an ideal Vedantic teacher in the ancient rishi tradition. Swamiji attained Mahasamadhi on the 16th of January 1957, a full moon day.

Pujya Gurudev Swami Chinmayananda, founder of Chinmaya Mission, taught the logic of spirituality, while emphasizing the balance of head and heart. Selfless work, study, and meditation are the cornerstones of spiritual practice, he said. Not satisfied with degrees in literature and law or other worldly aspirations, he pursued the spiritual path in the Himalayas under the guidance of Swami Sivananda and Swami Tapovanam.

He is credited with the renaissance of spiritual and cultural values in India and with awakening the rest of the world to the ageless wisdom of Advaita Vedanta as expounded by Adi Shankaracharya. On 3 August 1993, Pujya Gurudev attained Mahasamadhi. Until his very last moments, he worked tirelessly to create an international spiritual revolution.

His legacy remains in the form of books, audio and video tapes, schools, and social service projects; Vedanta teachers whom he taught and inspired; and Chinmaya Mission centers around the world serving the spiritual and cultural needs of local communities.

Depiction of his quest for Truth is made as a feature film in 2015 and is available in DVD format.

After the Mahasamadhi of Pujya Gurudev Swami Chinmayananda, Pujya Guruji Swami Tejomayananda assumed the post of the spiritual head of the global mission and worked tirelessly for 23 years in fulfilling the vision that Pujya Gurudev started. As he says, “I am not in Swamiji’s shoes, I am at his feet.” Pujya Guruji has served as Acharya of the Sandeepany Institutes of Vedanta both in India and California, USA.

He has written commentaries on scriptural texts, translated Pujya Gurudev’s commentaries into Hindi, and authored a number of books. A key contribution is “Hindu Culture: An Introduction”, a text acclaimed for its clear description of the basics of Hinduism and adopted as a text in some American high schools.

Pujya Guruji excels in expounding a wide spectrum of Hindu scriptures, from Ramayana to the Bhagavad Gita to the Upanishads. He conducts jnana yajnas on Vedanta as he moves around the world. His easy manner and devotional rendering of Vedanta texts has drawn many newcomers into the spiritual fold.

Swami Swaroopananda was bestowed by Pujya Guruji Swami Tejomayananda the privilege to also serve as the Head of Chinmaya Mission Worldwide in 2017. Previously, he served as the Regional Head of Chinmaya Mission Australia, United Kingdom, Middle East, Africa. and Far East; Chairman of the Chinmaya Vishwavidyapeeth Trust (University for Sanskrit and Indic Traditions); and Director of the Chinmaya International Residential School in Coimbatore, India.

In 1984 Swami Swaroopananda gave up his family’s thriving business in Hong Kong to undergo intensive training under Pujya Gurudev Swami Chinmayananda and Pujya Guruji Swami Tejomayananda at Sandeepany in Mumbai. He was initiated into the monastic order in 1992. Since then, he has touched thousands of lives across the world. His tremendous work in bringing out the essential wisdom and underlying unity of all religions has garnered him a place among the vanguards of self-development philosophy.

Swamiji has authored several commentaries on such important spiritual classics as Ik Onkar, Maha Mrityunjaya Mantra, and Sankat Mochan, besides numerous books on contemporary lifestyle subjects such as Simplicity and Meditation, Storm to Perform, Avatar, Managing the Manager, and Journey into Health.

Swami Ishwarananda is the resident senior monk at Chinmaya Mission Los Angeles. An accomplished master of Vedanta philosophy, Swamiji explains the universality of spiritual teachings in a simplified manner for audiences to grasp and for seekers to implement teachings in day-to-day living. Several companies, universities, and inter-faith consortiums routinely reach out to Swamiji for delivering talks to their employees, students, and congregations. Swamiji is presently one of the Directors of Chinmaya Mission West (CMW) which oversees the activities in North America. Previously, Swamiji was part of Chinmaya Mission Bangalore where he served as the secretary.

Inspired by Param Pujya Swami Chinmayananda and with the guidance of Swami Brahmananda, Swamiiji left his field of software consultancy and joined Sandeepany Sadhanalaya in Mumbai in 1991. Upon completing his Brahmachari training in 1993, as Brahmachari Someshwar Chaitanya, he served Chinmaya Mission Centers in Bangalore and Calcutta and eventually became resident Acharya of Chinmaya Mission Los Angeles. In March of 2000, he was given sanyas deeksha by Pujya Guruji Swami Tejomayananda and was named Swami Ishwarananda. Swamiji served the mission in Los Angeles until 2001. Swamiji was then made the Acharya in charge of Sandeepany Sadhanalaya in Mumbai for the 12th Brahmachari batch from 2002 through 2004, thereafter returning to Los Angeles.

Swamiji is a dynamic speaker; has given talks on Vedanta, stress management, management techniques, and other such related fields; and has also authored many books. 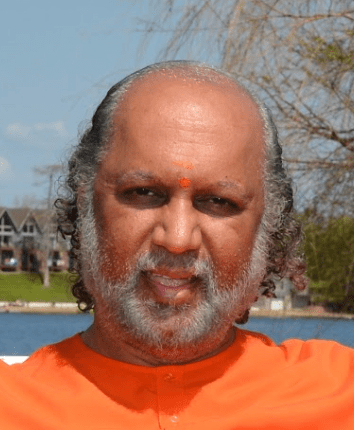 A collection of bite-size, thought-provoking snippets of Vedantic philosophy, ‘Darkness to Light‘ is based on contemplative talks by Swami Ishwarananda and compiled by Nimmi Raghunathan. The book was released by Swami Swaroopananda at Mahasamdhi Camp 2018 in San Diego and has earned compliments from Pujya Guruji Swami Tejomayananda ‘…very interesting… excellent editing work…’ and from Swami Swaroopananda ‘Profound yet simple. An exceptional aid for self-directed learning.‘

Quoting extensively from the Bhagavad-Gita and the Upanishads, yet captured in everyday language, Swamiji provides tools, encouragement, and advice on grabbing hold of the slipperiest thing known to humankind: The Mind

If death is only a notion, who needs to be liberated? Swami Ishwarananda, head Acharya of Chinmaya Mission Los Angeles, in this book, answers the question with great clarity. He mines the beautiful poetry of the great sage Veda Vyäsa to give the devotee the needed philosophical insight into the  Kasi Vishvanathashtakam. With each succeeding verse, he explains the deep symbolism of the Lord who can destroy body-attachment and liberate souls.

Swami Ishwarananda, with his trademark laser-like thinking guides the reader into a deeper understanding of who a guru and gently, yet definitively, he shows us that guru-bhakti alone can take us toward the eternal.

Swami Ishwarananda in his erudite exposition reveals that love by itself is healing, but divine love is several notches higher and a Divine Lover is an alchemist who transforms an ordinary life into an inner pilgrimage, leading to an ecstatic union with the Lord.

This booklet is a small collection oh Swami Ishwarananda’s communication with devotees through the internet as e-satsangs every month-inspiring, thoughtful and filled with humor.

This book uses the method of dialogs to break down complex thought with the words of the Master and make it approachable to all.it is a guide for the new travelers, who might have begun this journey by chance and grace, and also for the seasoned seekers already dedicated to his or her Sadhana.

This book is a compilation of articles that inspire the reader to discover the joy in life and find wisdom through a correct understanding of the workings of the mind and search for the higher divine life.

Along with the practical wisdom which Swamiji unravels in this book,  comes an urgent message that is not be missed: be a seeker, a true devotee and do it all NOW! And peace will be ours!

The book deals with questions like: How to slow down in busy life, overcome negative thoughts, dissolve fear, rise above thoughts, develop a spiritual relationship, discover inner poise, meditate.

Mahadevanji, a retiree from the Aerospace Industry with a degree in Physics, was whisked into Chinmaya Mission in 1978 by the compassionate Master Pujya Gurudev Swami Chinmayananda. He started Bala Vihar® and youth classes in 1982 in Southern California; presently, more than 1250 children are enrolled.

Mahadevanji is also a music and bhajan teacher and started the Shruti Music Choir of Kasi and Mithila, exclusively for children. He gives talks for youth and adults at Mithila and Kasi Centers and in universities, schools, and colleges around Southern California. Mahadevanji gives talks on the Bhagavad Gita to adults and conducted other Vedanta talks on Bhaja Govindam, Atma Bodha, Sri Rama Gita, Upadesha Sara, and Yoga Vasishtha.

Mahadevanji is also the Secretary of Chinmaya Mission in Southern California. In the summer of 2008 he was blessed by Pujya Guruji to teach at Chinmaya Mission Rameshwaram where he conducts regular Vedanta classes.